I’m taking a brief break from internet marketing pondering and prognostication to vent a bit about words. Specifically, words that aren’t actually words: 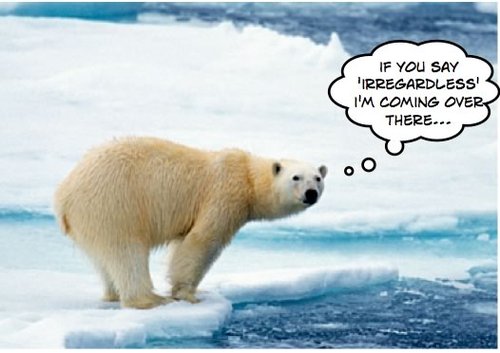 Irregardless. Wait, so is that the opposite of ‘regardless’? So, regardful? With regards? Oh, wait, it’s not a word!
Nuculer. Our wonderful President, as well as Jack Bauer, seem to know about a whole new form of energy. It’s not ‘nuclear’, it’s ‘nuculer’ or ‘nooculer’ or whatever the hell it’s supposed to mean. Not a word!
Like.. Like is actually a word. But it’s not, like, supposed to be a, like, conjunction, you know? I abuse this word, too, but I, like, stab myself with a spork every time I do it, y’know?
360 Degrees. Again, this is actually a phrase. But it’s been misused to the point that I think we should strike it from the language. I actually heard a CEO say “we’re going to turn this company around 360 degrees”. Okay. So you’re going to make me dizzy, yet accomplish nothing?
Brang. The fact that I hear adults use this phrase makes me weep for the species.
Ain’t. I like this non-word myself. And it’s actually been added to the dictionary. But it still makes me sound like I fell headfirst off a truck as a young child.
Performant. I don’t even know what the hell this ‘word’ is supposed to mean. But a developer threw it at me in an argument about SEO standards when he said that my changes would make the site ‘non performant’. I retired from the battlefield, realizing that my opponent couldn’t feel pain. That would require brain function.
Non-defunct. Yet another attempt by people to sound smarter by creating double negatives. Backfires horribly when the listener realizes the speaker could have said ‘alive’ and saved some oxygen for the rest of us.
Anti-opposed. I’m opposed to this word. seoxyzabcgh
I’ll stop now.