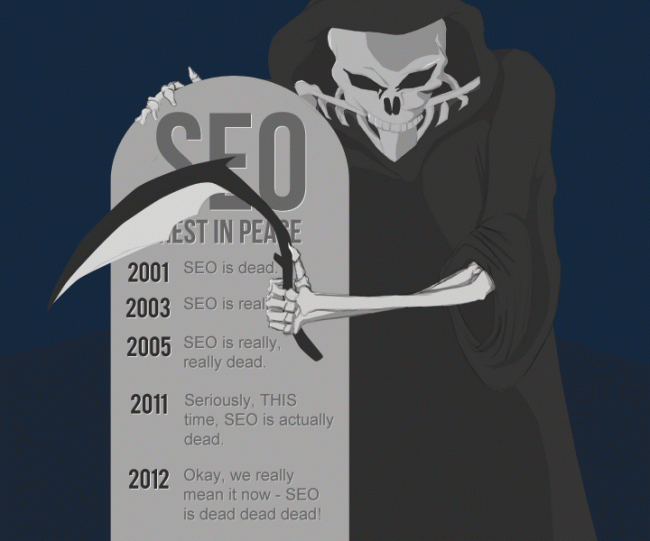 “The reports of my death have been greatly exaggerated.”
-Mark Twain

It’s been said that SEO is dead. It’s been said a lot, actually. But no, this is not another dumb, disguised, fake controversy “death of SEO” linkbait article. No. This is a fun, full-disclosure, zero-controversy death of SEO linkbait article. Now that you’re done groaning and rolling your eyes, settle for a fun-tastic journey thought the SEO graveyard!

What Killed SEO in the Past?

Here’s what I dug up (pardon the pun) as to what seems to have caused the demise of SEO over the years, in no particular order:

Judging by my list, Google is more than just an accomplice in the murder of SEO.

Notable Quotes about the Death of SEO

Things have been said. I’m putting the credit/blame away right now, and letting you guess if your favorite SEO made one of these statements:

“I just wanted to get your attention. Ok?”

“SEO has become a bad word.”

“I’ve said it before, but SEO is in many ways about change. The best SEOs recognize, adapt, and even flourish when changes happen.”

“…I figured I’d say it before someone else gets all the links.”

” SEO is here to stay, it will never die”

And my personal favorite quote from someone writing recently about the death of SEO:

Do you think anyone would eat their words now?

How Often Does SEO die?

What’s the “death to SEO” velocity over time, anyway? Inquiring minds want to know. And as your intrepid graveyard-romping reporter, I decided to check it out.

I used Google’s nifty custom-range date search feature, and here’s what I found:

Pretty self-explanatory. If I were a betting man, I’d think it’s a safe wager that SEO will be dying more this year than last year.  What’s your bet? Seems to me that SEO has a bright future when it comes to dying!

Why Would Someone Say That SEO is Dead?

There are plenty of reasons you might hear this:

Sidebar: There are some extremely intelligent, experienced, passionate people in this industry who are discussing if SEO should, um, evolve – not the practice of SEO, that’s always evolving – they’re talking about the term “SEO” itself. I’ve read some very insightful commentary on this from the likes of Rand Fishkin, Ian Lurie, Danny Sullivan and others (sorry if I didn’t mention your name, you’re intelligent and experienced too – oh, and passionate).

To accurately analyze SEO obituaries, I did some rooting around. Let’s start with Google Trends. What do we get for “SEO is dead” and “death of SEO”?

Nothing. Skunked. “Not enough search volume to show graphs” – my heart sank… but ever hopeful and always optimistic, I headed over to Google Insights for Search.

Surely there must be data there! (There is, and don’t call me Shirley).

Hmm. A little more interesting, but not by much. Making me feel like “Insights” is an inaccurate name for this tool right now.

Next I tried Ubersuggest, but found nothing interesting (or funny) there.

Okay okay – let’s go to AdWords and see what we can find:

Wow, really? Ten bucks a click for “SEO is dead”? Hmm, I wonder who’s stupid enough – I mean enterprising enough – to bid on such a term:

Huh. At the bottom is of the Google SERP is, um, Google.

Well, I’m not too surprised and you’re probably not either. I’ve heard of this kind of thing before, and you probably have too. Wouldn’t you just love to peek inside their AdWords and Analytics reports?

But I do scratch my head a bit as I think about why Google would be bidding on this term. Are they betting that SEO will die? Do they want it to? I’ve heard people – smart, experienced, respectable people – say as much, but I wondered if they were just being dramatic. Or if it was just the beer talking. Let’s presume they were talking with Google beer-goggles.

What do you think? I really, really want to know.

Hurry up and tell me – before SEO dies!

Disclaimer: All of the following represents completely unscientific research and analysis on my part. No SEOs or Internet Marketers – and certainly no inbound marketers – were hurt or injured in the writing of this article. If any of this gets your panties in a bunch, I suggest lying down and taking some deep breaths until the feeling passes, or switching to looser-fitting undergarments, or both.